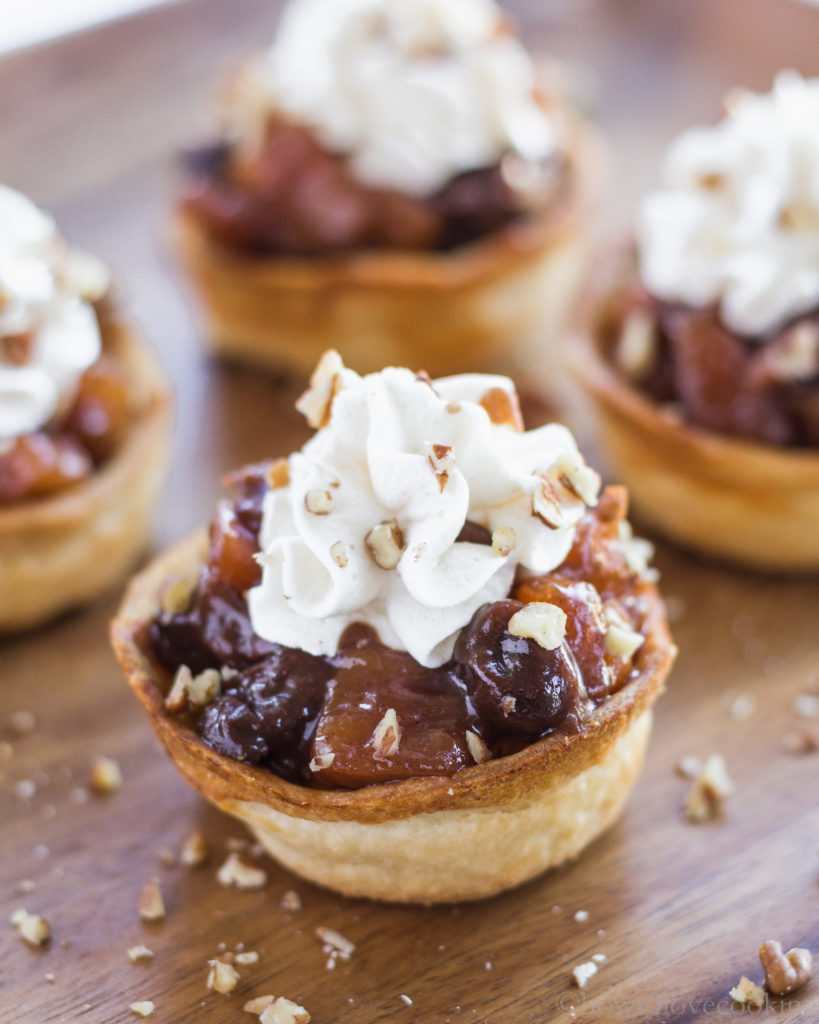 If you like your apple pies fun-sized, full of tart cherries, and made in the slow cooker –  you should keep reading.

One of the biggest pains in the rear I’ve discovered while entertaining is not having enough oven space, or ovens for that matter.

Like I mentioned before, I don’t have a big fancy kitchen with double ovens, so I have to strategize when I bake and roast. I can’t have five dishes that need to go in the oven at different temperatures for different lengths of time. My guess is you probably can’t either.

So the other week I thought, “What if I make dessert in the slow cooker? Is that even possible?” “Of course it is, Cathy!” I told myself. “Anything is possible if you believe in yourself…or your slow cooker.”

So, I got to brainstorming. Even though I’m personally more of a cake kind of gal, I know pie has its place, especially on Thanksgiving.

Pie, however, is MUCH more time consuming, and leaves a little more room for error. It can take some practice to get homemade pie dough down perfectly. Then there’s the business of cooking the dang thing without ending up with a “soggy bottom.” (This happens to be my favorite critique the judges give on The British Baking Show, but also MY BIGGEST PIE BAKING FEAR.)

I don’t want to scare anyone out of making a pie from scratch top to bottom if that’s what’s in your heart. I’m just saying, if you don’t want to do that…for the first time…on Thanksgiving, I have a super simple short-cut recipe for you – Slow Cooker Cherry-Apple Pie Cups. 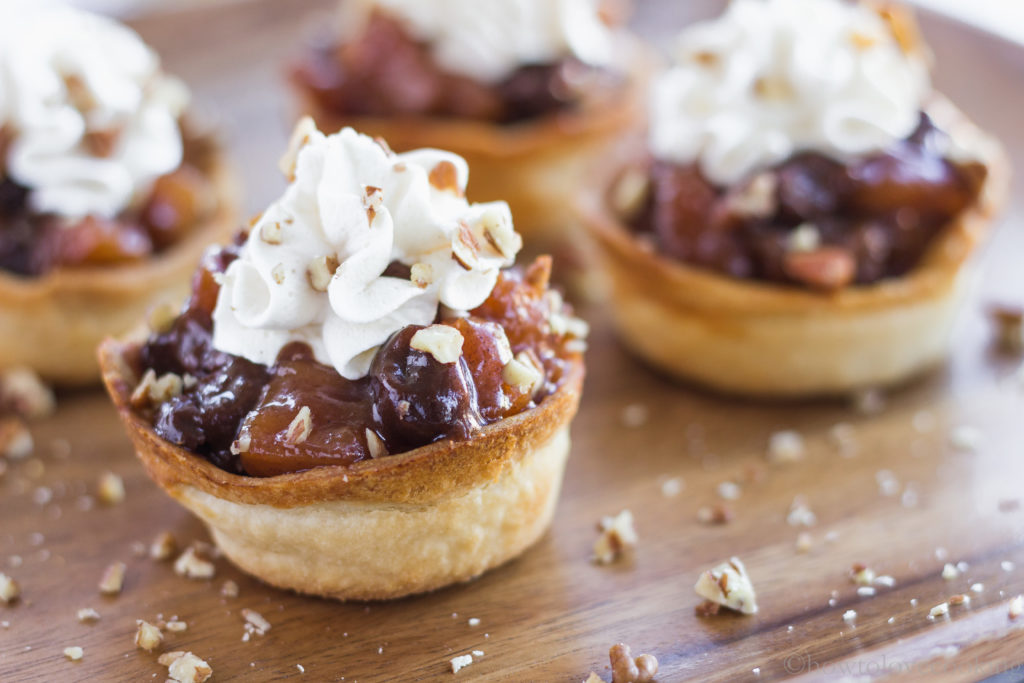 Store bought pie dough saves lots of time and stress. If you have the time and enjoy making your own pie crust, then by all means, go for it! You’ll be able to say “from scratch” all day long! However, frozen pie dough works perfectly here and is a beautiful shortcut to take advantage of from time to time. You will need the oven for this part, but for less than 20 minutes!

The flavor combo of the apples, dried cherries and spices in this recipe is just heavenly. The cherries reconstitute in the cooking liquid and give a nice pop of tartness to the pie cups.

Here’s how they go!

First, let the dough defrost a bit so you can work with it. Once rolled out, use a 4 inch cookie cutter to cut out six circles of dough from each pie crust. Press the circles gently into each muffin cup so they come evenly up the sides. My circles were a bit smaller than 4 inches, so I had to do some patchwork. I simply cut a bit of the excess dough I had and attached it to the edges with a little bit of water.

Then, crack an egg into a bowl and give it a quick whisk with a fork, add a teeny splash of milk, cream or whatever you got. Brush the inside of each pie dough cup with a little bit of the egg. This is called an egg wash. It helps your pastries and baked goodies take on a beautiful golden color when they bake.

Give the bottoms of each pie dough cup a poke or two with a fork, and place them in the oven to bake for 15-18 minutes until golden and completely cooked through. 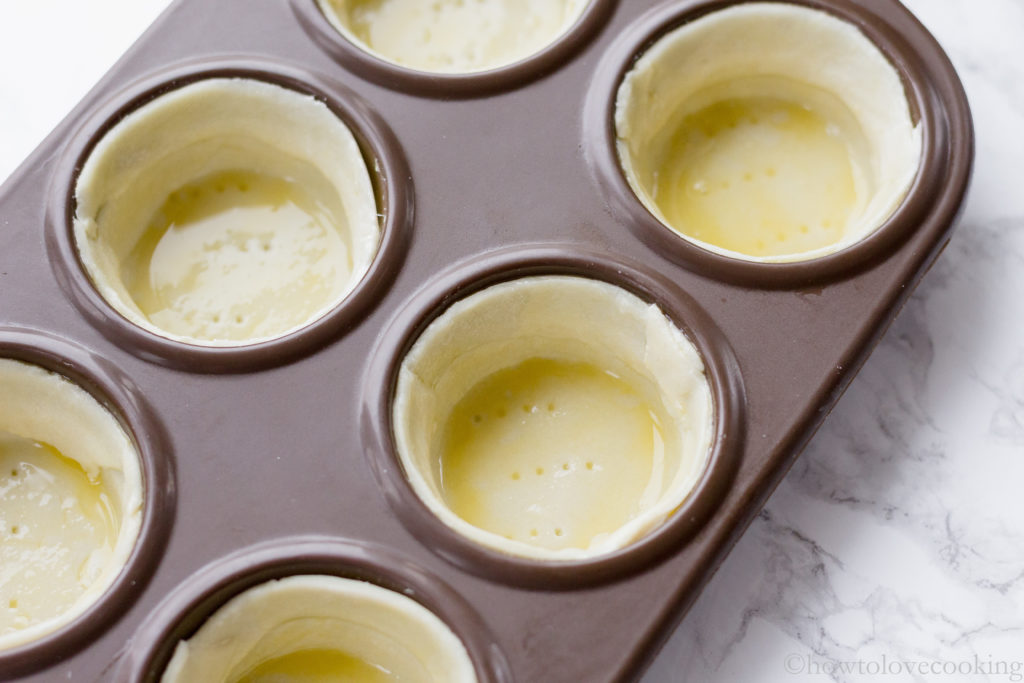 Once your dough cups are done, allow them to cool for a few minutes on a plate or cooling rack. They are now ready to be filled with the slow-cooked fruit filling. Alternatively, you can do this step a day or two in advance and keep them in a zip-up plastic bag in the fridge. Quite frankly, this dessert is delicious served hot or cold.

This next part is easy because you just dump everything in the slow cooker! Take your chopped, peeled apples and dried cherries and toss them in. Then, add your sugar, spices, salt, butter, vanilla, and three tablespoons of water. Set it on high for three hours and clean your house, cook more food, study, do some yoga, paint a masterpiece – you have total freedom (and three hours!). 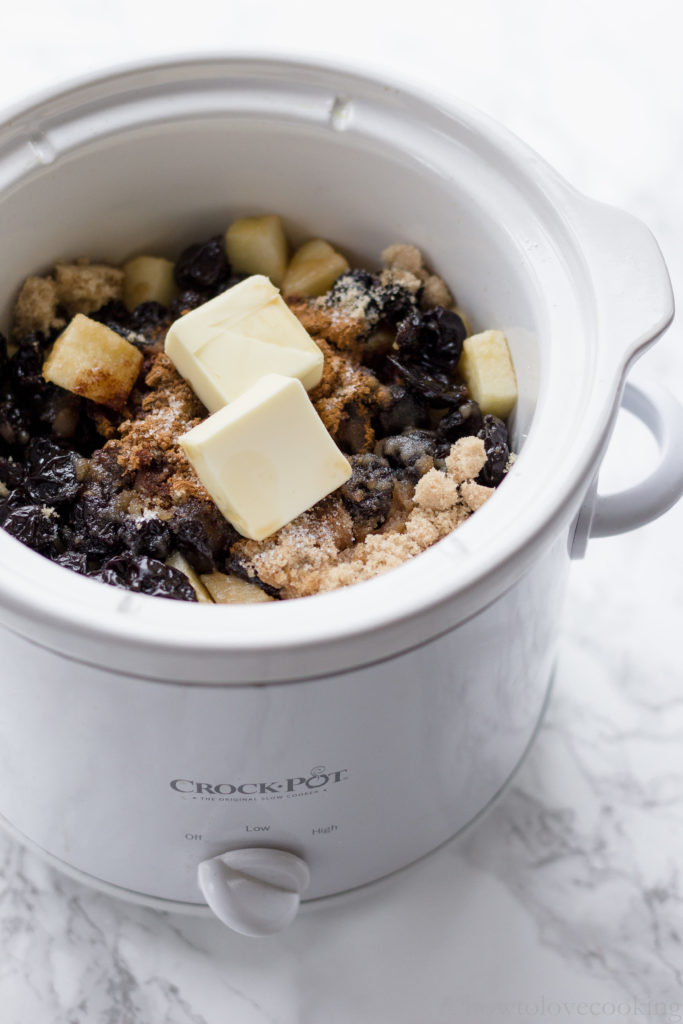 I gave the pie filling a stir once or twice with a spoon, but otherwise, I paid it no attention, as if I were playing hard to get.

After three hours, I scooped up about 3-4 tablespoons of the cooking liquid from the slow cooker and put it into a small bowl. Then, I added one tablespoon of cornstarch to the liquid and whisked it until it was completely dissolved. (This mixture of liquid and cornstarch is called a slurry and it is often used to thicken sauces and soups.) Pour your slurry back into the aromatic cherry-apple mixture and give it a good stir. The fruit filling will be thick and shiny almost instantly.

Now, turn off the slow cooker, and begin to assemble your cups! Take one of your baked pie cups, and fill it with a healthy spoonful of cherry-apple filling.  Top it with a squeeze of homemade vanilla-cinnamon whipped cream and a sprinkle of chopped pecans, but only because it’s the holidays. (Just kidding, I would also do this on a plain ol’ Tuesday.) 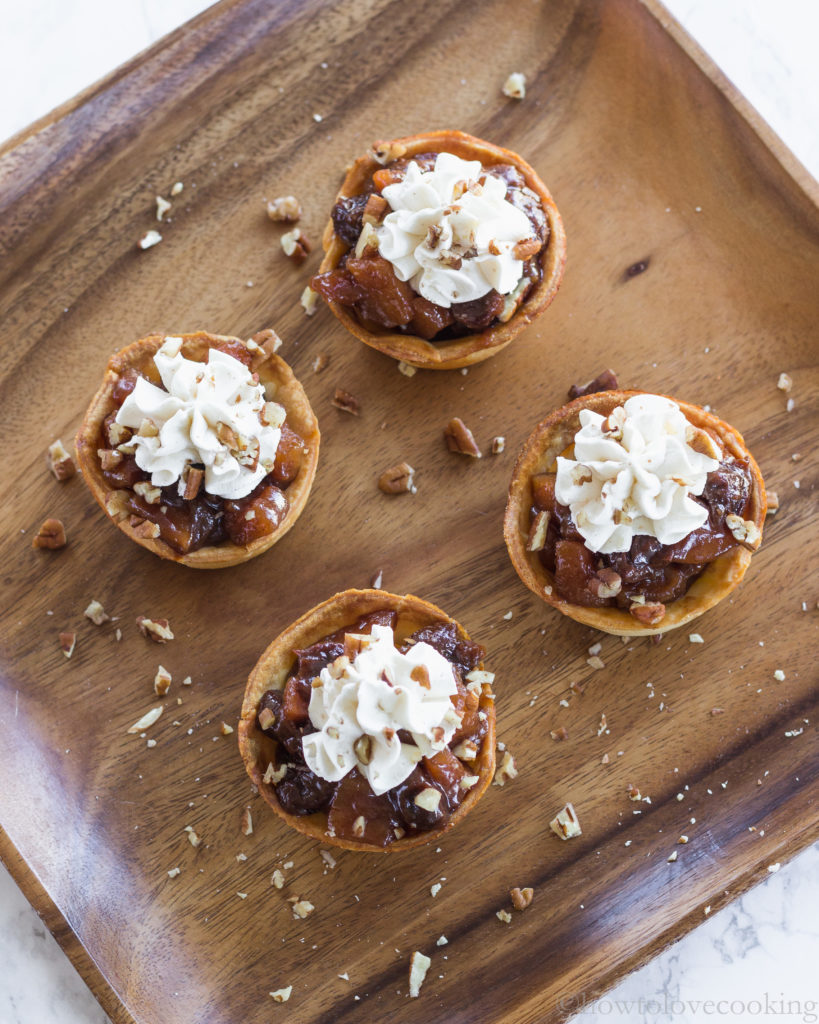 I decided to use a small open star piping tip and a large freezer bag to make the whipped cream ruffles, but only because I’m a sucker for cute presentation.

A huge reason why I love cooking is because it’s truly just another chance to create something beautiful and delicious.

These Cherry-Apple Pie Cups are just that. They’re fun-sized, they’re flavorful, they make your house smell amazing, and they’re the perfect sized dessert after indulging in your most massive meal of the year.

Enjoy & Happy Thanksgiving from How to Love Cooking 🙂 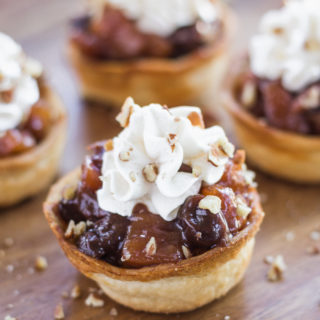 Hi! I'm Cathy, and I used to be an AWFUL cook. After years of trial and error, I grew to love it and not surprisingly, got a lot better! Here, I share my love for cooking with fun and easy recipes that anyone can make. Feel free to leave a comment or a question below any recipe you try. I'm really glad you are here! A little more about me...

We use cookies on our website to give you the most relevant experience by remembering your preferences and repeat visits. By clicking “Accept”, you consent to the use of ALL the cookies.
Do not sell my personal information.
Cookie SettingsAccept
Manage consent

This website uses cookies to improve your experience while you navigate through the website. Out of these, the cookies that are categorized as necessary are stored on your browser as they are essential for the working of basic functionalities of the website. We also use third-party cookies that help us analyze and understand how you use this website. These cookies will be stored in your browser only with your consent. You also have the option to opt-out of these cookies. But opting out of some of these cookies may affect your browsing experience.
Necessary Always Enabled
Necessary cookies are absolutely essential for the website to function properly. These cookies ensure basic functionalities and security features of the website, anonymously.
Functional
Functional cookies help to perform certain functionalities like sharing the content of the website on social media platforms, collect feedbacks, and other third-party features.
Performance
Performance cookies are used to understand and analyze the key performance indexes of the website which helps in delivering a better user experience for the visitors.
Analytics
Analytical cookies are used to understand how visitors interact with the website. These cookies help provide information on metrics the number of visitors, bounce rate, traffic source, etc.
Advertisement
Advertisement cookies are used to provide visitors with relevant ads and marketing campaigns. These cookies track visitors across websites and collect information to provide customized ads.
Others
Other uncategorized cookies are those that are being analyzed and have not been classified into a category as yet.
SAVE & ACCEPT